A tiny person with a bouncy butt tells a very long joke. Control the crank of the Playdate to not make him fall.

In order to download this game you must purchase it at or above the minimum price of $0.99 USD. You will get access to the following files:

I come here to thumbs down anyone who leaves a good or neutral  comment.

if only i had a playdate

Mr. Phillip, do you will make more games in the future? I would might exciting.

Love this game.  It's ultra-hard but it's very funny.  One to give to your friends to play to prove just how different the Playdate can be :-)

Every person i have passed my Playdate too i have seen them smile at this game...

"Due to processing fees the minimum amount is 100 cents."

Of course. What would you expect from this spammy game. Should be banned.

spammiest game ad ever. Disgusting. How do  I block a game or author on itch.io. Sick of seeing this in my search results.   Voted down 594531 times. Thumbs down down down.

This is actually really polished, well made and really fun. I only wish it had a score number. Better and more fun than a Whitewater Wipeout

Minor bug, on the Playdate the curly-quote character in the name doesn't render correctly.

The game is fun, frustrating in the best way, and very fluid to play. It makes a good demo to show the crank to people, very easy to just pick up and play with no explanation.

The joke is fun until the punch line, but, and maybe I'm just not getting it, I didn't find the punch line to be funny. I was expecting a groan-inducing pun, or a dad-joke level joke, which with that build up would have been hilarious, but it was just... boring? Again, maybe I just didn't get it.

I don‘t regret spending my money on this - it‘s a playdate classic! Very fun though I didn‘t get too far by now…

This game is a little tough, but it's so worth it!  Fun and execution of the crank is perfect.

Another great PlayDate game that makes me laugh and smile -- this is a Top 5 sideloaded game you can have as a PlayDate owner and it's well worth the 99 cents!  IMO it's worth 5 dollars and the trees also getting planted are a nice touch.

Just updated my playdate and the game seems to be working without issues now! :D

Hey all, for those waiting for a fix to the crash:
I asked around and it seems to be an audio loading issue specific to the audio format used for the slapping sound when the player hits the crank, which is why it crashes when that happens. The next playdate OS version should probably fix it, so we'll all be sitting tight till then. I bought this when I got my playdate and still haven't finished the joke so I know I'm gonna be counting the days till a new patch comes ;-;

Hello. Your game has been crashing since Playdate released the new OS update several days ago.

really excited to try this but as others have noted it crashes immediately on latest firmware (1.12.1)

PlayDate is releasing 1.12.2 firmware today. Hopfully this fixes all current issues with games.

cool ty for heads up! I’m having same issue, game crashes as soon as the little dude lands on the crank

Hmmm where did you hear there was supposed to be a 1.12.2 firmware update? It came and went with no update :(

On Twitter from panic employees. Unfortunately we are all still waiting.

The new firmware update is out. It fixes the game issues

Crashes for me as well with the newest Playdate update.

No longer works on latest PlayDate firmware (1.12.1). It crashes my PlayDate when gameplay is about to start. Please update.

new update coming out for the playdate that might fix issues

Crashes almost immediately. Can't wait to play this once it's fixed.

One of the best gimmick games I’ve ever played. Regrettably the latest system update causes this game to crash the first or second bounce. It’s well worth the money once this problem is fixed.

This.....is the height of comedy. Congratulations.

Even though I have not completed the game, and even with a bouncy butt, I can say that this really is worth 0.99$.

in love with this game

Oh my god I'm dying this is hilarious.

edit: It randomly fixed itself! Not sure why, but now it loads with the correct orientation.

So far, I haven't heard the entire joke.  But the game is definitely worth the $0.99, one day I'll find out if the joke is!

Thanks for this fun experience!

A minor thing that I noticed and you are probably already aware of: there’s an encoding issue with the apostrophe in the games list (Settings > Games).

Easily addictive and fun. I love that bouncing butt that I have dropped so many many times already. Play alone or with headphones, though, otherwise someone else may get knife thoughts. 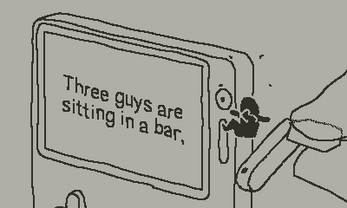